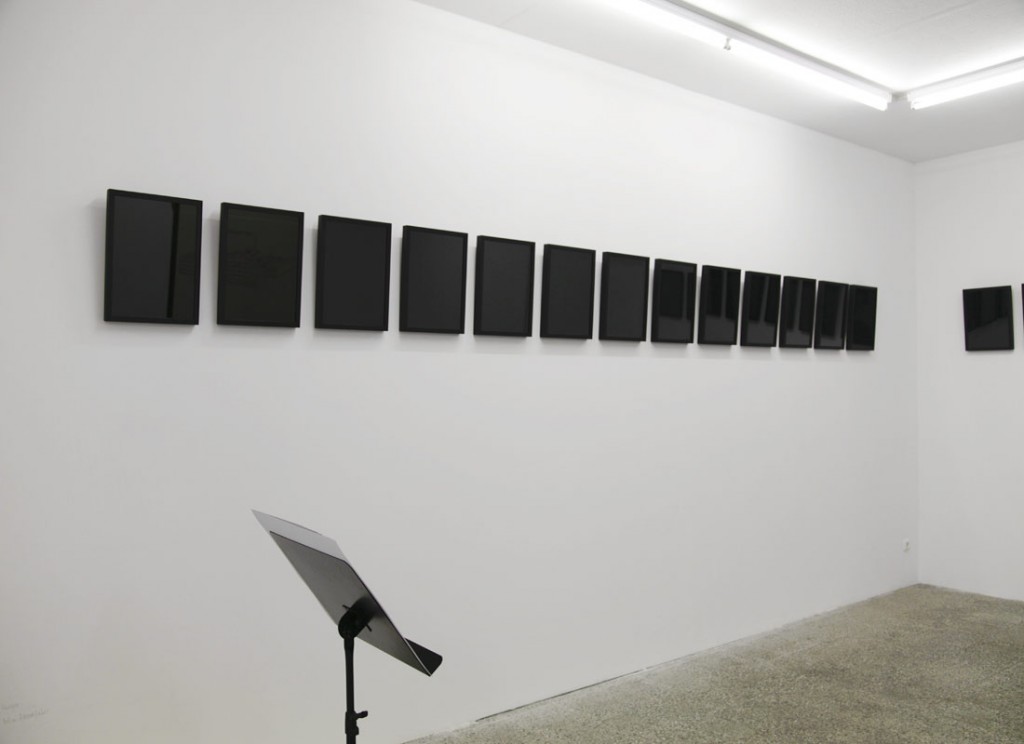 The images’ deep black front refers to Malevich’s Black Square as an icon of the cosmic nothing. Nineteen portraits of cosmonauts and astronauts who perished during their travel to space are mounted on the images’ backsides. They stay invisible for the spectator – being present solely during the setup and dismantling of the work. This deals with the dissolving of the individual in favor of the space travel machinery, where the individual’s survival completely depends on the technical apparatus.

At the same time the form refers to the absence of the dead – they are present, but stay invisible. Their presence/absence in the collective memory hints at the collective trauma of the individual’s knowingly immolation in the name of a (Soviet) collective or (American) Dream of freedom, an immolation for a »higher cause«.

On the left from the images a music stand holds black sheets of music with white notation on it. From each sheet the visitor learns the names of the dead and the corresponding space ships. Thus each music sheet refers to the individual voice of a single dead space traveler. The reference to John Cages 4’30 min silence piece is not coincidental but in space the silence is total, the vacuum doesn’t transmit sound waves. Also an audience is absent.

It is Francis Hungers interest, »to uncover the myth junk that the last century left for us, for the benefit of the question, how to create preconditions for social emancipation anew.« Hunger sees space travel (along the military use of intercontinental rockets) as a substantial technological catalyst for the development of the calculation machine organized after the Fordist assembly line principle towards the networked medium computer, whereas according to Hunger the temporal and formal parallels of modernity’s vanishing towards a post-modern thinking are obvious.