Semiology of Cyberspace is a small program written in the language PERL creates a digital, immaterial sculpture, consisting of a structure of folders and subfolders. Each folder contains four subfolders that include the same structure again.

Nowadays browsers are able to depict data in 2-D. In 3-D one may imagine how an absolutely symmetric structure is being developed that resembles a snowflake. It is up to an upcoming generation of browser software how this structure will be actually depicted in the future. Once generated the structure will not change, but depending on the upcoming software its visual representation may change.

SOC – as a sculpture in cyberspace – doesn’t only refer to the Cartesian model of cyberspace as it was developed since Charles Hintons 1885 concept “Many dimensions” (1); it also relates to all works of art that deal with huge dimensions. It thus refers inter alia to the mechanistic utopias in art — as they can be found e.g. among Russian Constructivists where Vladimir Tatlin’s Tower to the 3rd International may function as an example. 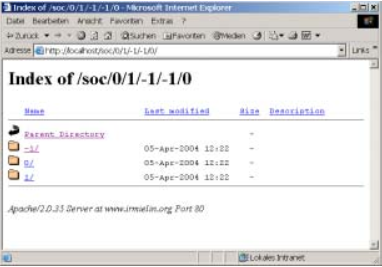 The creation of the huge SOC structure is a spectacle in cyberspace and can be tracked by the public over a certain time period. Each day one level of subfolders (the iteration level) is being created. It is possible to see the structure grow each day.

It is up to the webspace that can be allocated to SOC, how big the structure will become. According to calculations, the 17th iteration creates 85 Gb. To keep the structure absolutely symmetrical the next finished iteration would fill up 341.33 Gb.

SOC is written in PERL, a common language on http servers. The SOC structure is, once created, persistent to technical changes — it can be copied into any other digital media. It is important that the work is accessible for a long time period. Learning from the history of programming languages it can be expected that PERL is in use for the next 15-20 years and will still be known in 50 years. The script will be published on a special documentation website under the GNU Public License.

SOC was developed bu Francis Hunger in 2004 during a residency at V2_/Rotterdam.