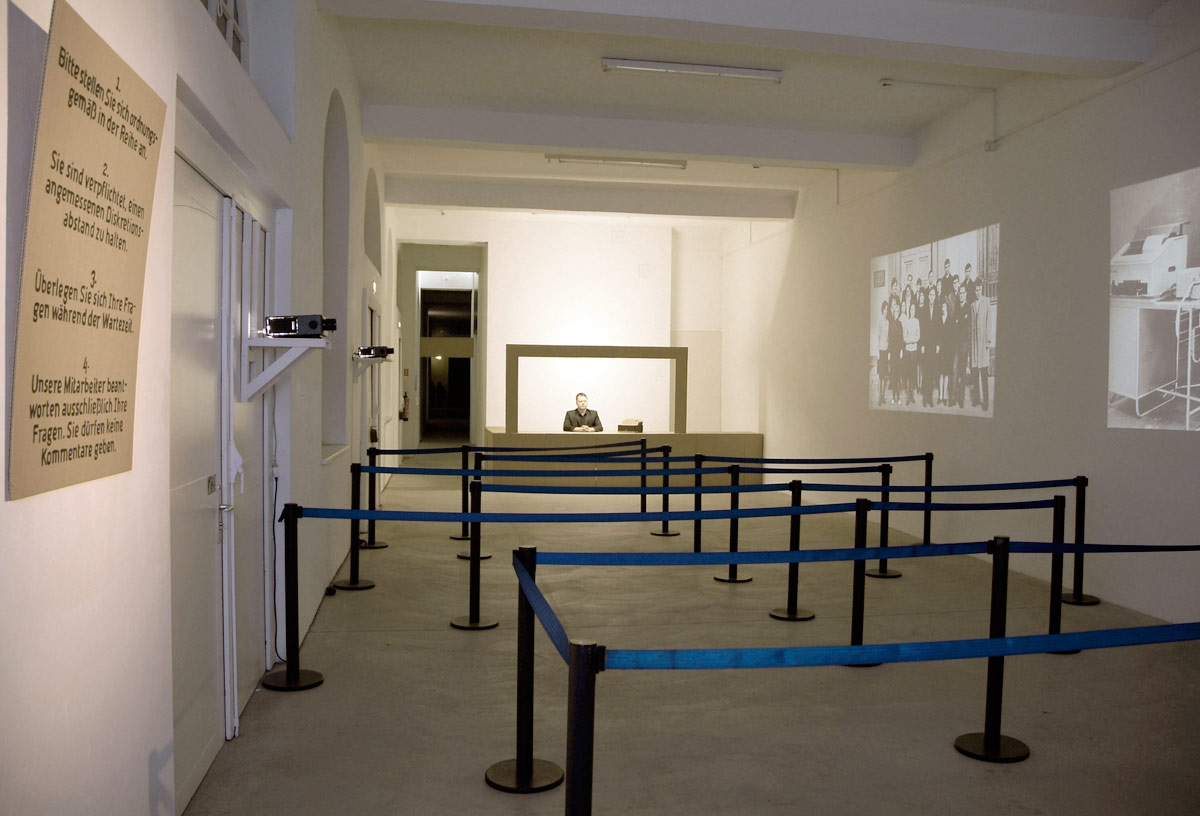 The SETUN computer was developed in 1958 by Nikolai P. Brusentsov and his team at the Moscow State University. SETUN is based on ternary logic (-1, 0, 1), which distinguishes it completely from the usually binary operating computers of the present and the past. While the binary logic just allows two states yes (1) | no (0), the ternary logic has three different logical states: yes (1) | no (-1) | both (0). Western computer scientists tried to create such a ternary computer in the following years but never succeeded.

The work was developed over several stages: The archive research since 2003, performance and installation since 2005 and a book with essays and interviews, in 2008.

The installation consists of a cardboard wooden office, with a waiting line of rope and stanchions in front of it. Two slide projections show Nikolai P. Brusentsov with his team in front of the Moscow State University Computing Research Center and the serial model of the Setun Computer. At the entrance a cardboard sign advises visitors how to use the office: 1.) They shall line up properly and 2.) they shall only ask questions or they’ll be expelled from the office. 3.) Only visitors entering the waiting line in the right manner are served. 4.) Visitors who try to make comments are dismissed.

A book with essays and interviews was published in early 2008: SETUN. An Inquiry into the Soviet Ternary Computer. Institut für Buchkunst Leipzig, 2008. 200 pages with illustrations, German/ Englisch, ISBN 3-932865-48-0

The work deals with the production and representation of knowledge, the historical and ideological aspects of technological development, and it aims to create an understanding of the intertwining of current technological and social developments using a historical perspective. The book makes original Russian sources available in English and German language and is accompanied by an original essay investigating into the relations between the “communist” Easts’ and capitalist Wests’ technological development. While the book aimes to provide a basis for further research, the artistic work tries to involve visitor and artist into what can not be expressed within the realm of theoretical discourse.