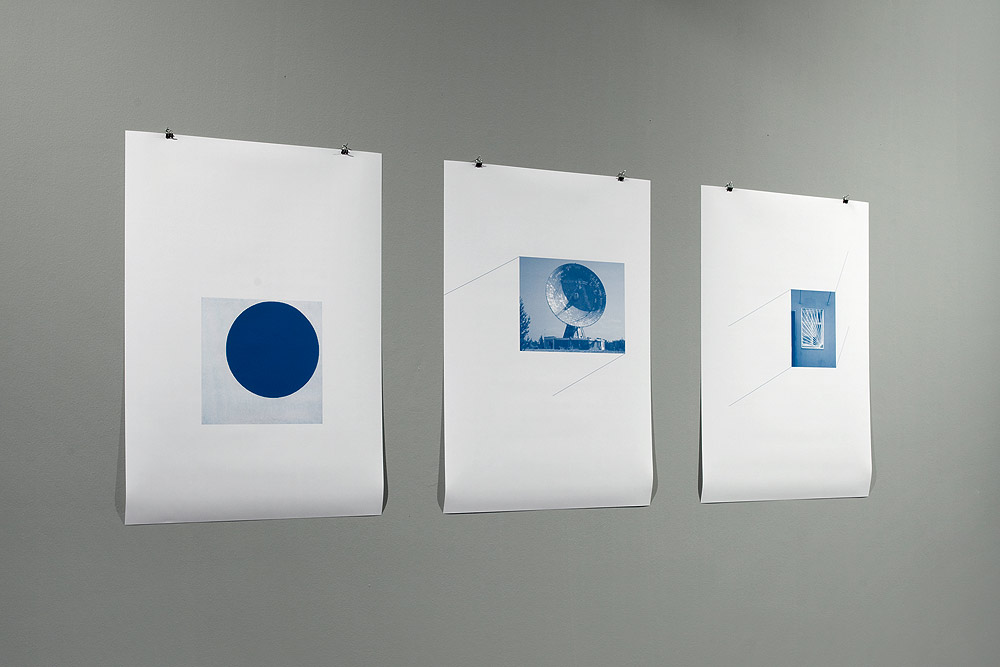 Francis Hunger‘s work Sieg der Sonne (Victory of the Sun) refers to the Russian avant-garde of the early 20th century and quotes symbols from the labour movement. The title is a variation of the Futurist opera Victory over the Sun (1913) of Aleksei Kruchonykh (text), Mikhail Matyushin (music), Velimir Khlebnikov (text) and Kasimir Malevich (stage design). The opera “forms a concentrate of the avant-garde‘s analytical concepts, which were understood as an antithesis to the idea of the symbolist Gesamtkunstwerk.”[1] It aimed at  the dissolution of the old institution of Russian theatre and formulated a statement for a new kind of theatre. In the story, “strongmen” have managed to imprison the sun in a house made of concrete. The opera is an anticipation of future developments in two regards: the belief in technological progress on an ideological level, and, on an aesthetic level, the proclamation of Suprematism in art, indicated by Malevich’s stage design. Glaring spotlights on Malevich‘s stage replaced the sun and thus made away with one of the Symbolist’s most important aesthetic items.

“Kasimir Malevich’s Black Circle on White Background”, explains Francis Hunger, “is deeply linked to the development of this opera, but can also be regarded as a symbol for the sun – or rather, its negation.” The sun is, at the same time, a symbol for a social utopia, for the glorious future of the victorious labour movement which was often referred to in window adornments in socialist cities. The form of a sphere also reminds us of the first satellite, Sputnik – a turning point in the technological development in the capitalist as well as in the socialist societies. “If one thinks of Sputnik as merely a sphere, it is an suprematistic object. The antennas however add functionality, and thus it becomes constructivist.” (Dragan Živadinov)

Previous postRecording the Choir of Dead space Travellers Next postBook: Setun – An inquiry into the Soviet Ternary Computer. (2008)