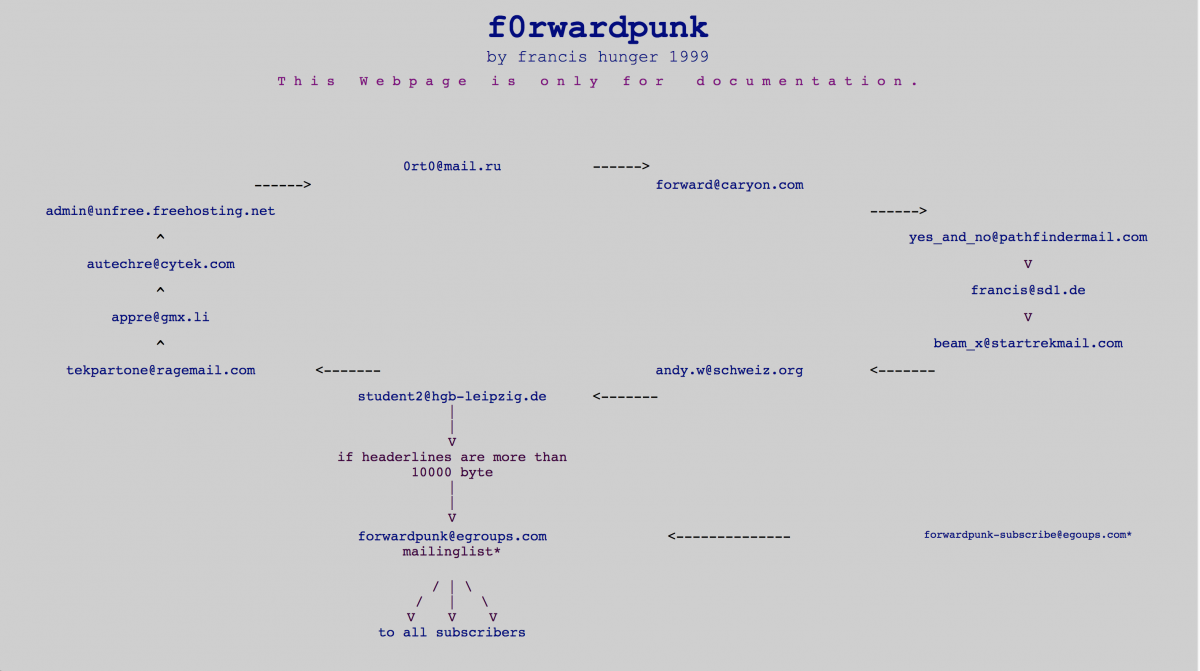 F0RWARDPUNK – How to crash a mailserver.

Although this text may give the opposite feeling,F0RWARDPUNK ist not high technology. It is based on the lowest internet-tech You can imagine. It could have been realized ten years ago and is open to future as well. It is fully based on ascii and the e-mail-services.

On the net You’ll find a lot of ‘free’ services that finance their offers by advertisement. One of those is a forward-service that will pick up Your mail and automaticly resend it to another adress. You just have to leave Your adress and other personal data for “statistical reasons” than You can configure the system and everything that for example is send to the adress andy.w@schweiz.org is forwarded to student2@hgb-leipzig.de.

F0RWARDPUNK is consisting of 11 mail-adresses, and each will send it’s mail to the next one, without knowing what happened before and where it will be sent after. A loop has developed. Each of the mail-systems is doing what it has to do.

E-mails consist of the body, including the message and the header, that is written by the sendmail-programs. Headerlines can look like this:

While a mail is in the loop, headerlines will repeat, except the time, that alters. While a mail is in the loop, it will enlarge as much as headerlines are added. The transport information is bigger than the message that shall be transported. This way also the file-size is growing. If the mail has reached a significant size by circling e.g. 10000 byte, it is forced by a small script at student2@hgb-leipzig.de to leave the loop. It is send to another (outside) adress to be later saved on harddisk.

Saturday June, 19th this has crashed the HGB-mailserver. After leaving the loop, the mail was sent by the script to a given outside-mailadress (francis@geocities.com), that should save it for documentation reasons. This adress didn’t work and replied the mail automaticly to student2@hgb-leipzig.de with “user unknown”-error . There the script decided that this mail is bigger than 10000 byte and sent it once again to francis@geocities.com and so on. Each time headerlines where added and failure-messages copied into the body. After 5 hours the sendmail-program had no swap/temp-space and stopped working. These are the three last lines of the sendmails error-log:

Think of F0RWARDPUNK as a sculpture. It is formed by vectors, which are described by the computers configuration, operating-system, time and timezone as well as it’s geographical coordinates. F0RWARDPUNK is not interactive.

The following interview was made for the intereferences festival:

1/ Would you say that your artistic process includes a critique of technologies and electronic medias?
In general I’m interested in the process of copy and paste. To me these are the most important values of digital media. I’m willing to give away my code and I’m willing to steal the code, wherever I can get it. A critique of technologies and electronic medias? – I don’t know. To criticise something within the system itself and with no distance is difficult or even impossible. I’m trying to frame an idea first before I choose the media. When starting to work with a computer I force myself to have an clear shaped idea of form and function. This seems to be the only way not to get lost inside the 1001 digital possibilities.

2/ Does your work take part in (or contribute to) to the community debate ?
It does. It is influenced by the open-source movement and the DIY-idea, although both have to be seen critical. I expect some people will notice my thoughts and the interchange of ideas will flow back into the community. Another way to take part in the community are my regular dj-sets on http://www.contour.net.

3/ Do you think art centers and institutions play a determining role in you work?
It depends on the institution itself and the behavior of people working for that institution. An institution can focus on things and thoughts that wouldn’t be able to come together otherwise. Althought it´s easier to work in a place that is filled with the technology that you never would own yourself e.g. video-cutting etc.. Smaller and younger instituions are better.

4/ Are international networks of artists a decisive alternative to global capitalism?
No. They fit into the logic of postmodern capitalism and while acting inside the society they repeat the structures and hierarchies of the neoliberal ideology. As long as there is no general idea of what could come after capitalism, as long as there is no utopia, we are stuck in these circumstances. On the other hand developing networks seems to be one possibility to counteract against some of the worst scenarios of our time. My friends and me discuss a lot about that.