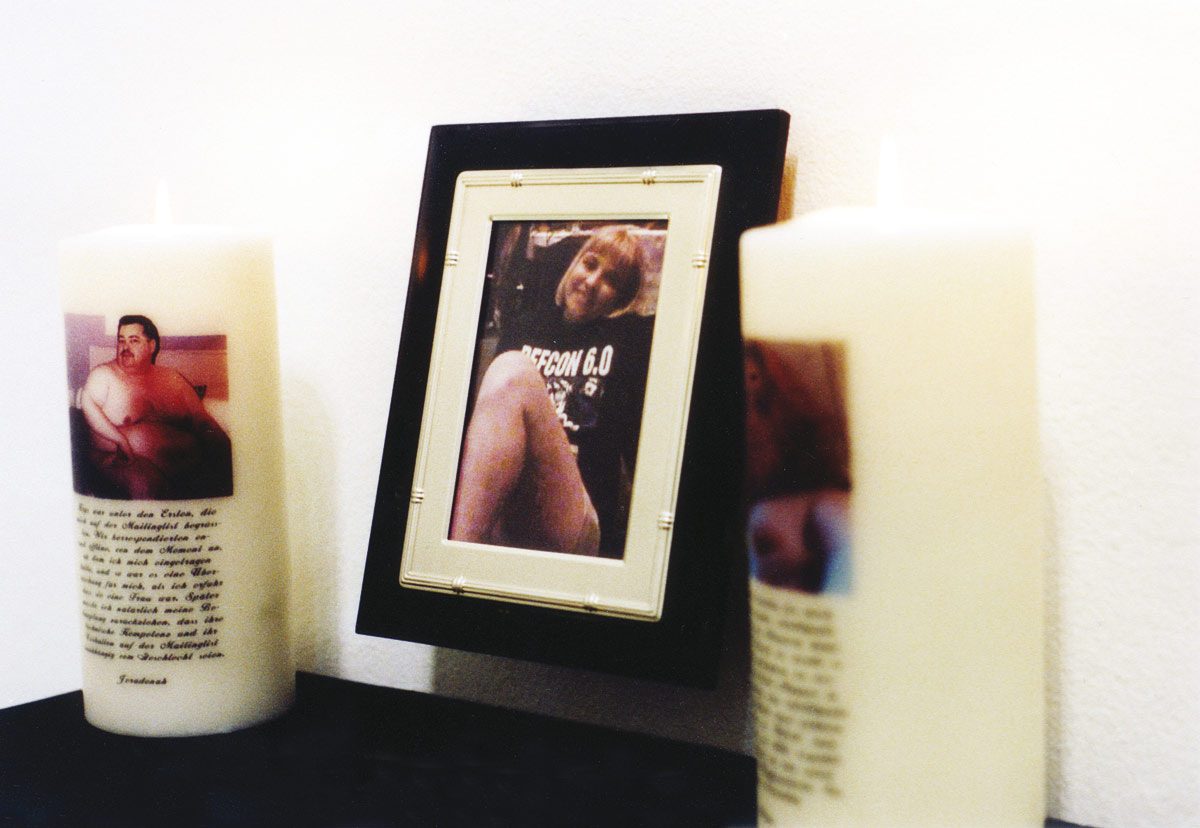 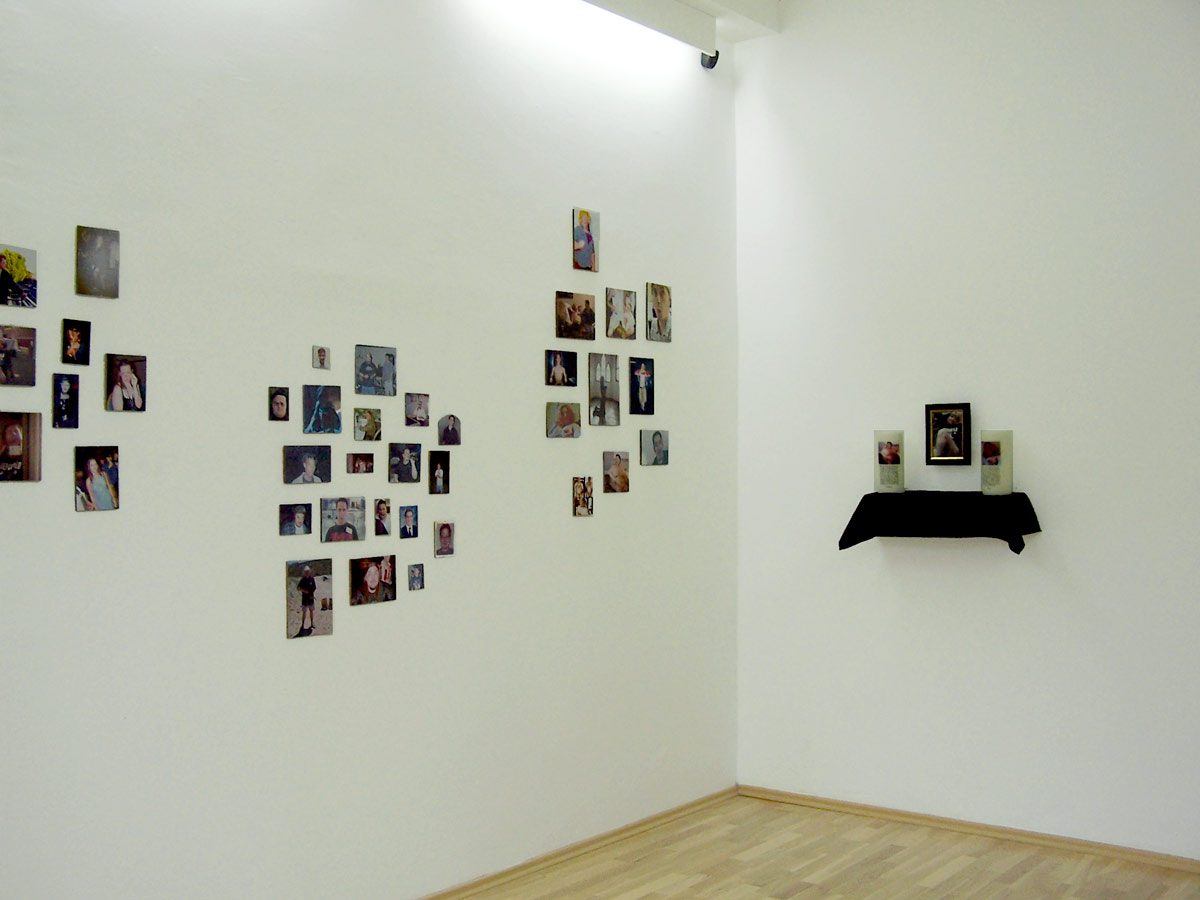 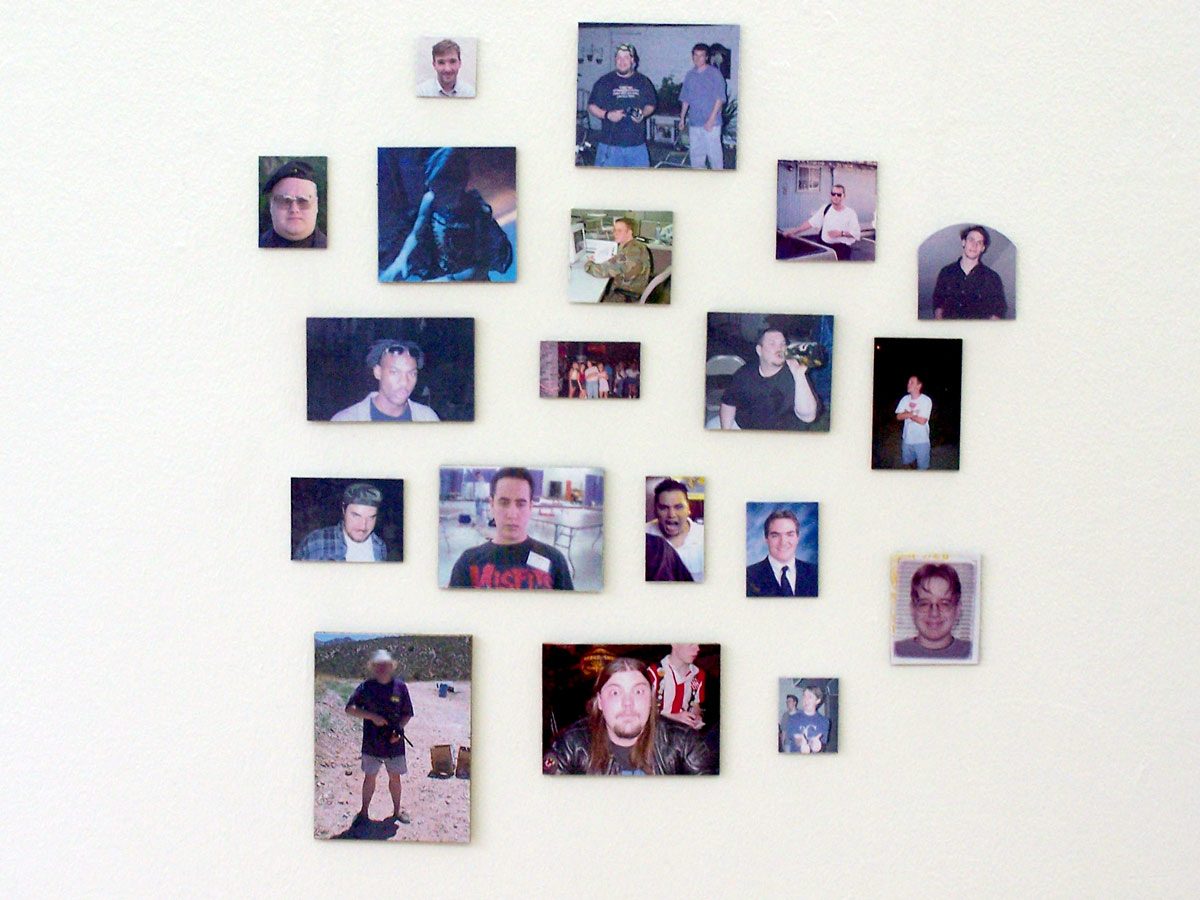 Portraits from the hacker group (digital prints on cardboard)

Before one explores the space visually, it could make sense to put attention to the sound layer that constantly fills the room. It becomes obvious, that the spoken text corresponds to the images shown on the wall. Francis Hunger has found these images without any comment on the Internet and began – fascinated by the material – to contextualize the images through describing their visual information in detail and researching additional information.

“I became aware of the fact that some of the depicted people did wear similar T-shirts with ‘DEFCON 6.0’ printed on it. This seemed somehow known to me and finally I recalled the relation to John Badhams 1983 movie ‘Wargames’. I started searching the net again and thus stumbled across a 1998 Las Vegas hackers meeting named DEFCON 6.0 first, before I came across the Hollywood movie.”

Krystalia, one of the very few women who could get accepted within the hacker-group, passed away from cancer one year after these images were taken. Francis Hunger transferred this incident into an altar-like object that points out the important role of Krystalia within the male dominated hacker group. A statement by her friend Pham that is printed onto a candle reads:

“Krys meant a lot to me. She was a strong intelligent woman in a man’s world. She made it easier to be taken seriously, when most men in our community didn’t really take an intelligent woman seriously. Some called her a bitch, some insulted her. All respected her. But she was so much more than a ground-breaker. She was a friend.”

An Interview by C.M.
C.M. One of the central motifs in your installation “Krystalia” is a collection of images that depicts people who distinguish much from each other. When listening to the images’ descriptions which are present as a constant sound-level layered in the exhibition-space, it is never stated clearly what exactly connects these images to each other although one feels that there must be some commons in it …

F. H. … which has to do with myself being uncertain about the exact commons. At least this is clear: the depicted people have most likely attended a hacker-convention called DEFCON 6 that took place in Las Vegas in 1998. So one could assume that most of them are hackers or computer-enthusiasts. I’ve found these images when I opened an uncommented link at the website, all in one folder, just with the file names indicating a persons pseudonym. I felt really attracted by the crude mixture of individuals, so I saved the images to my local hard disk and tried to investigate it further.

C.M. Could you describe this research a bit further?

F. H. First I’ve started to collect and sort the images in terms of a classical description / analysis. For each I tried to describe who is depicted on it, what is the clothing the person wears, are there any peculiarities, what is to be seen in the images’ background? These where the first questions. Then–after searching the pseudonyms that were given with the file names–it became clear that they are hackers. I felt a bit like a secret service agent.

C.M. Most striking without doubt are “Chip” who appears as drag queen or “Pham”, who’s posing naked while not really fitting to a models’ ideals of beauty. Beside these ‘irregularities’ one also observes pornographic images that exactly fit these ideals.

F. H. Yes. The wide spread is really amazing and one starts to ask, how can these different role models coexist together? The common meta-topic ‘hacking’ seems to make the cooperation of that many distinguished individuals possible. During my research I also came across a condolence-website dedicated to Krystalia, a hacker who died in 1999. Pham for instance has made her thoughts public about her friendship with Krystalia on this website and thus also discusses the roles of both within the group. In her condolence-e-mail Pham writes, that Krystalia was not only a friend to her who motivated and encouraged her personally, but also the first woman who had to be taken seriously by the male majority for her excellent technical and communicational skills. So Krystalia enabled women in general to get recognition within this hacker-group. This is one side. On the other hand there is the image of Misfit in the collection. He is just shown with his torso–relatively anonymous. He confronts the observer with a bottle of Bacardi-rum and in the other hand he holds a men-magazine, showing a female, who presents her shaved vagina. In my opinion this could be understood as an example, that despite the general acceptance that women have fought hard for, patriarchic structures still exist – including the role models that follow from it.

C.M. Do you have an explanation why the cooperation although those visible divergence is still possible?

F.H. First you have the technologically motivated common topic. Then it also seems to be of some importance, that the women have strong technical competencies and were able to prove that within the group. And of course–in a mainly heterosexual setting as it could be supposed for this group–it is important for the male majority that there are woman. But still it develops a very small scope.

C.M. Which could be seen as a moment of self-assertion, a possibility to change the rules of the game, a gender hack …

F.H. The situation of course has positive aspects and potentials, whereas I suppose that the usual gender-ideas and social models generally still frame it. There exist strong mechanisms of managing and regulating the formation of opinion within the group. If a woman has just been marked as “scene-whore” she has no further possibility to change this. This kind of exclusion mechanisms cannot happen to men, nobody would presume that they would use their “sexual attraction” to improve their position within a hacker group. These accusations exist only against woman and they have the chance to use this small space that opens up to act while they have to be aware precisely to meet the right measure, which is coded by gender-normations.